How to Paint Bullnose or Rounded Drywall Corners

Posted on February 11, 2021 by KylieMawdsley

Who invented rounded drywall corners anyway? Clearly it wasn’t a designer or anyone with common sense, as they’re a royal P.I.T.A when you want to use TWO different paint colours! I figure it must have been a drywaller who decided that it was easier to create a curved line than a clean 90-degree angle.

So, I’m going to share with you some ideas on how to change paint colours when you encounter these blasted things. This blog post is not photo heavy and is more detail-oriented, so you better get ‘yer big girl (or boy) panties (and reading glasses) on! What does this mean? This means that when you’ve got two walls that meet at a 90-degree angle with a curved edge you need to decide which room is the PRIMARY room (wall) and which is the SECONDARY room (wall).

But before we get into what’s what, let’s talk about hallways.

If you have a main hallway, ie. a hallway that the living room, dining room, and/or kitchen are joined up with (via rounded corners), the hallway is almost always considered the PRIMARY consideration, as you need to walk through it to reach the adjoining rooms. It can be awkward to have the colour in the adjoining rooms wrapping around into the hallway when it’s the FIRST SPACE YOU’RE WALKING THROUGH before you reach the adjoining rooms. But let’s be honest, having that ole vertical stripe of colour is awkward REGARDLESS of which room it’s in, the key is in picking the lesser of two evils (which is why many people choose to do both areas/rooms the same colour – as shown below). Long story short, if you have to walk down a hallway to get to a room, and the hallway/room meet with a rounded corner, the hallway is USUALLY the PRIMARY consideration.

When it comes to rounded corners, we’re dealing with two rooms/walls that are meeting via a rounded or bullnose corner. Excluding hallways (as discussed above), the PRIMARY room is the most important room of the two for whatever reason you decide. Here are a few considerations… In the above photo, it seems LESS awkward to have the dining area colour rolling into the kitchen, whereas if the kitchen colour wrapped around the corner into the dining room, there would be an awkward stripe that affects a VERY large, often-used space.

REMEMBER, if you don’t cut a rounded corner in HALF, you’re going to see a stripe of colour in one room or the other. While seeing it in EITHER room isn’t awesome, try to choose the lesser of two evils.

This is the room that comes in second place in the pecking order.

So, now that you’ve decided which area is primary and which is secondary, you’ll bring your ‘primary room colour’ around your rounded or curved corner and will start your secondary colour where the wall resumes its flatness.

The reason for this is that it’s better to have a wee stripe of the primary room colour in the secondary space, rather than the other way around, as one way or another you will get a bit of a ‘stripe’ where the one colour ends and the other begins. In the above area, we’re dealing with two transition type areas – a stairwell and a hallway. While they happen to be the same colour, if we WERE to paint two different colours, the stairwell area would be the PRIMARY space with the hallway being the SECONDARY space.

Because we have to walk through the stairwell area to get to the hallway. Now, the shaded areas may be whispering in your ear and telling you otherwise, which we will talk about below, but remember that these shadows will change as the day progresses.

The 3 Best NOT BORING Paint Colours for a Dark Hallway

2.  DIVIDE YOUR BULLNOSE OR CURVED CORNER IN HALF

This one is tricky, but if you’ve got a good eye and steady hands it’s a GREAT solution (in other words not me, two glasses deep on a Friday nite…). It’s also the best choice if your colours are high contrast with each other.

Take your Frog Tape  (much better than regular painters tape) and run a vertical line right down the center of your curved corner. What this does is it creates the ‘illusion of a 90-degree sharp angle’. Of course, your corner is still rounded, but when you look at it from four feet away it looks more like a standard corner and you also reduce the risk of having a ‘stripe’ of another colour in your primary or secondary space.

I am not a pro-painter, but a ‘pretty darned good one’ and this is almost always what I do with my rounded corners.

In the middle of the day, take a look at how the shadows fall on your walls. Often you’ll see that the natural light and shadows will help you to define where to stop one colour and start another.  Usually, the natural light flows entirely around the rounded corner and then falls into a bit of a shadow where the flat part resumes.  Now, this is certainly a way to figure out what goes where, but keep in mind that this can change quite a bit as the day progresses, so make sure that your shadows stay somewhat consistent throughout a 12 hr period. PERSONALLY, I prefer to stick with TIPS 1 & 2. 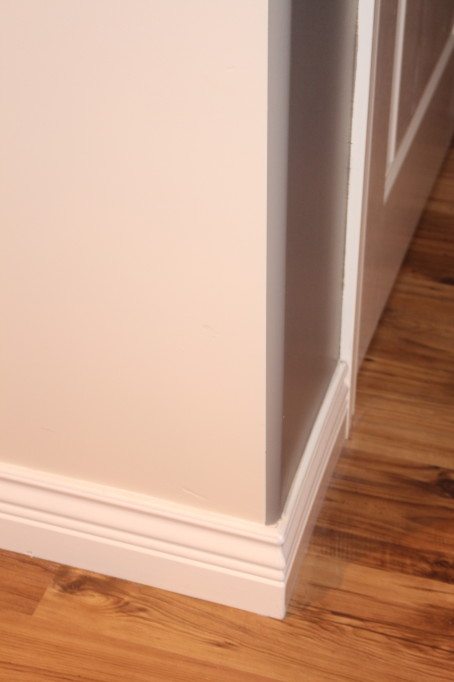 The person above did NOT follow the shadows and you can see that they actually created quite a distinct ‘THREE-colour palette’ as the gray paint colour turns lighter when the natural light hits it. This can be hard to avoid to a degree, however with the type of contrast that is shown, they would have been better off doing one of the following:

If you just aren’t happy with your rounded corners, figure out which ones are the worst offenders and consider wrapping them in mouldings which will cover up those rounded corners and give you a clean starting point in each room.

In this next photo, notice how there are rounded corners in the inner hallway area, but the transition between the hallway/dining room is covered in mouldings – SMART! 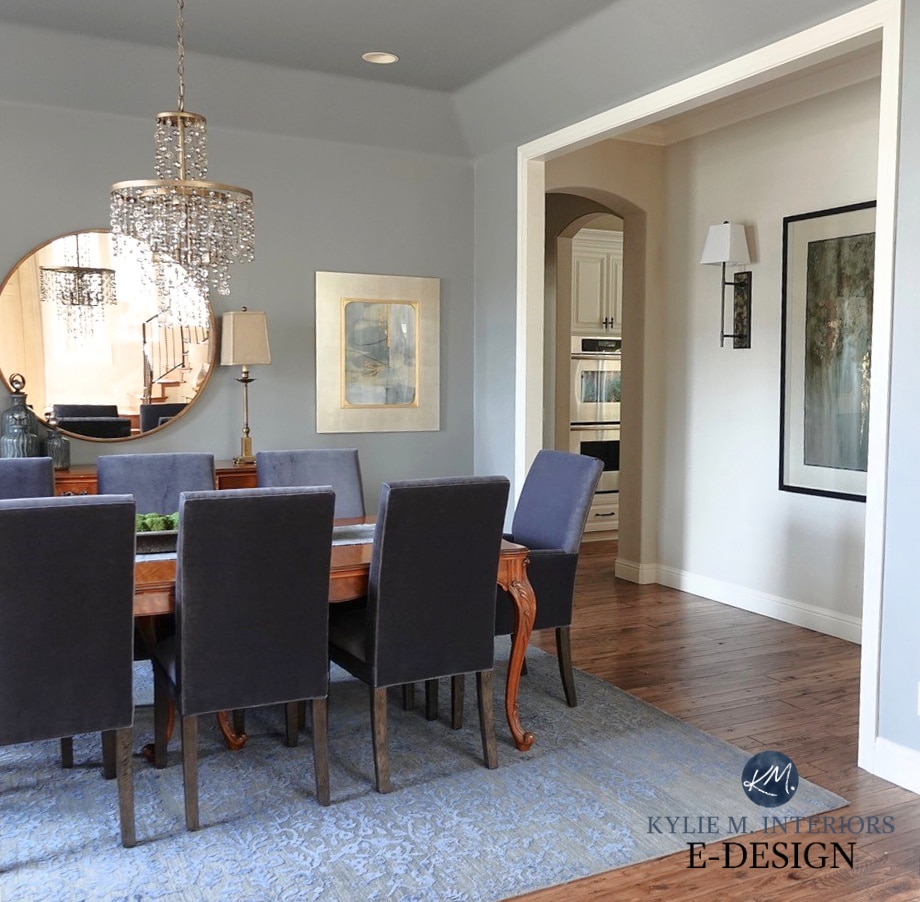 Why You Keep Choosing the Wrong Paint Colours

How to Deal with Popcorn or Textured Ceilings – Info You Need BEFORE You Scrape!

Not sure which colours to choose for your home? How to Update Your Fireplace – 5 Easy & Affordable Ideas

Tips to Make Your Fireplace Look More Modern Is your fireplace outdated and boring? Have you been wanting to do a remodel, but can’t afford a full makeover? If so,Share
Read More

Warm bulbs, cool bulbs & everything in between… Remember when you’d go shopping for light bulbs and all you had to think about was wattage? Not anymore. Now, it’s ALLShare
Read More

How to Mix Fabric Patterns & Colours in 4 Easy Steps

TIPS & IDEAS: Mixing & matching patterns Pattern mixing is a great way to add personality and visual interest to any room. However, it can be downright impossible if youShare
Read More