Posted on November 10, 2020 by KylieMawdsley

The Best Shades of Cream for ANY Room! 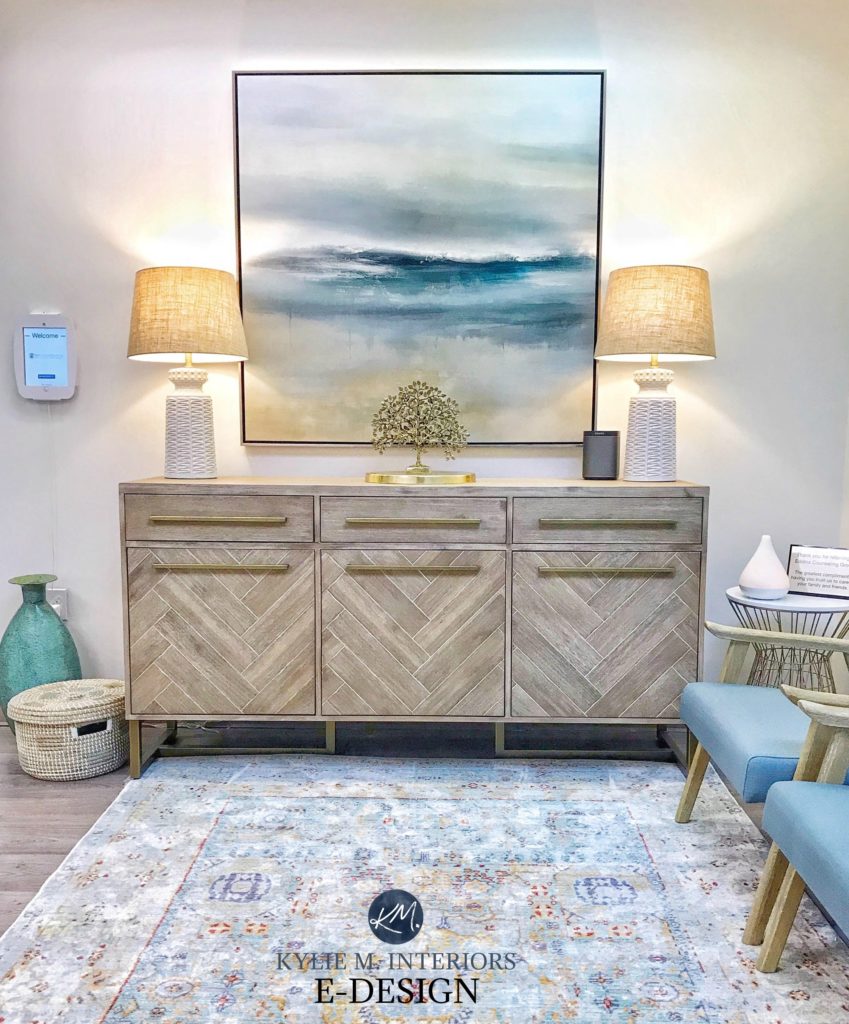 The reception at my client’s office – Eddins Counselling

But FIRST, we need to have ourselves a little chat (btw, ‘chats’ in my world include wine, Doritos and no bra, so get comfy). I have a lot of clients who say they LOVE cream, but DON’T love yellow. Well, here’s the deal Ally McBeal (ahem, dating myself) – without yellow, you can’t have cream! 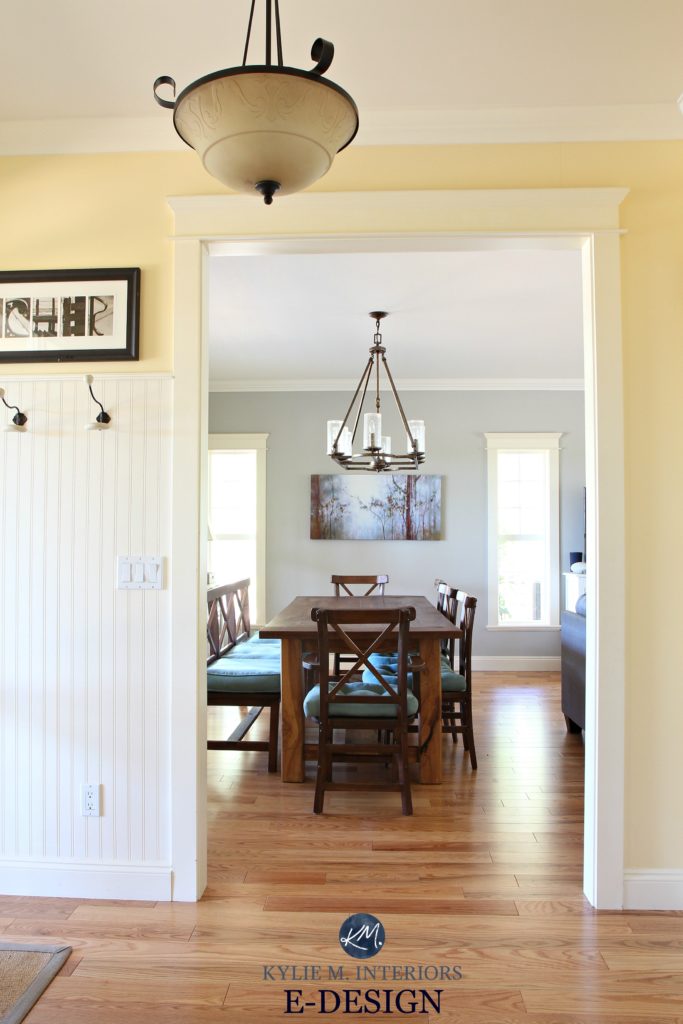 That’s right, cream IS yellow, it’s just yellow with a neutral base calming it down (and often picking up other undertones along the way, such as orange and green). The key is in finding a cream that has the right AMOUNT of yellow in it, whether you like a little or a LOT!

You can’t get cream without yellow #mindblown!

This is why I’m sharing a WIDE RANGE of warm cream-inspired colours with you. Some are SUPER muted while others tiptoe the yellow brick road, but don’t worry, ALL of them have warmth in mind! I’m also sharing some alternative options, as sometimes you need that wee tweak to get things just right (not to be mistaken with a wee TWERK, which fixes my husband-related problems – wink wink). Creamy – just like my coffee with its morning shot of Baileys in it. Oh, not THAT type of creamy…right.

Sherwin Williams Creamy is a FANTASTIC cream paint colour because while it COMMITS to its yellow base, it’s not overpowering by any stretch of the imagination. 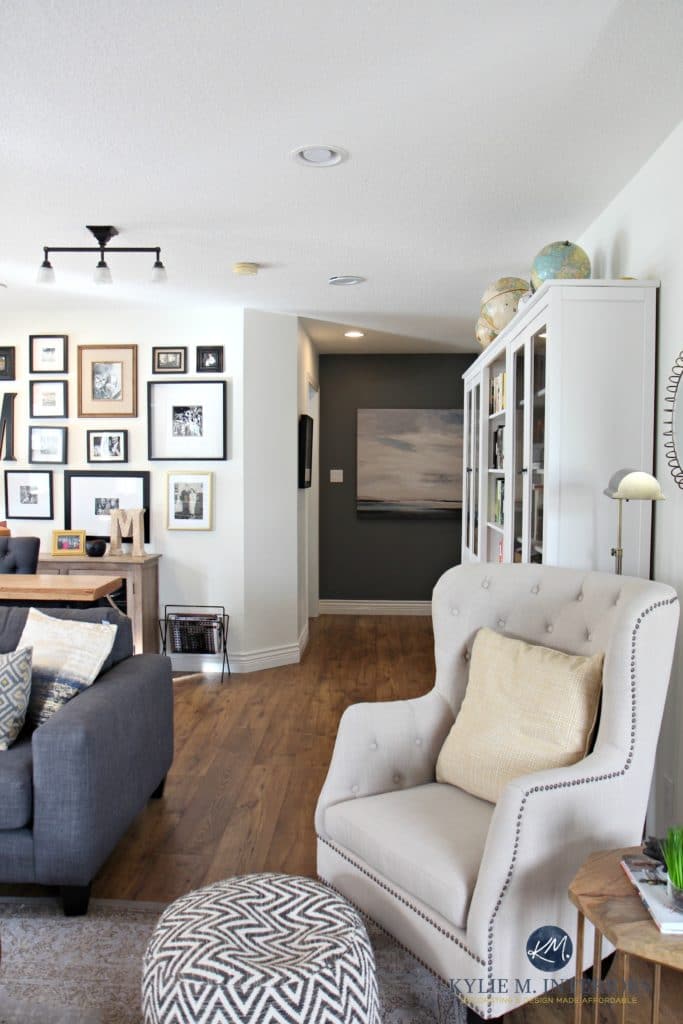 Creamy has an LRV of 81, so it’s on the HIGH end of the off-white range – winking at the WHITE end of things. This means that in bright rooms, it can TOTALLY wash out, while in others, you’ll notice more of its creamy warmth.

WHICH PAINT COLOURS ARE SIMILAR TO CREAMY, BUT A LITTLE TWEAKED? (aren’t we all…)

I wouldn’t necessarily call this a timid WHITE as Timid White is more like a timid yellow! That’s right, Timid White is a great way to get cream without going overboard on the banana boat. And while you wouldn’t notice it until this colour got a bit deeper, there is a tiny bit of green tucked deep inside, but at this depth, it doesn’t tend to show up to the party.

WHICH PAINT COLOURS ARE SIMILAR TO TIMID WHITE, BUT A LITTLE TWEAKED?

On the FAR side of cream sits Benjamin Moore Featherbed, a cream-inspired colour that definitely PUSHES THE BOUNDARIES between cream and yellow. Personally, when I’m looking for cream, this goes a bit too far, but it depends on how much yellow you can handle.

In the BEFORE photo below, the yellow wasn’t bad, but Mom and Dad were looking for a more muted approach in this soon-to-be nursery… 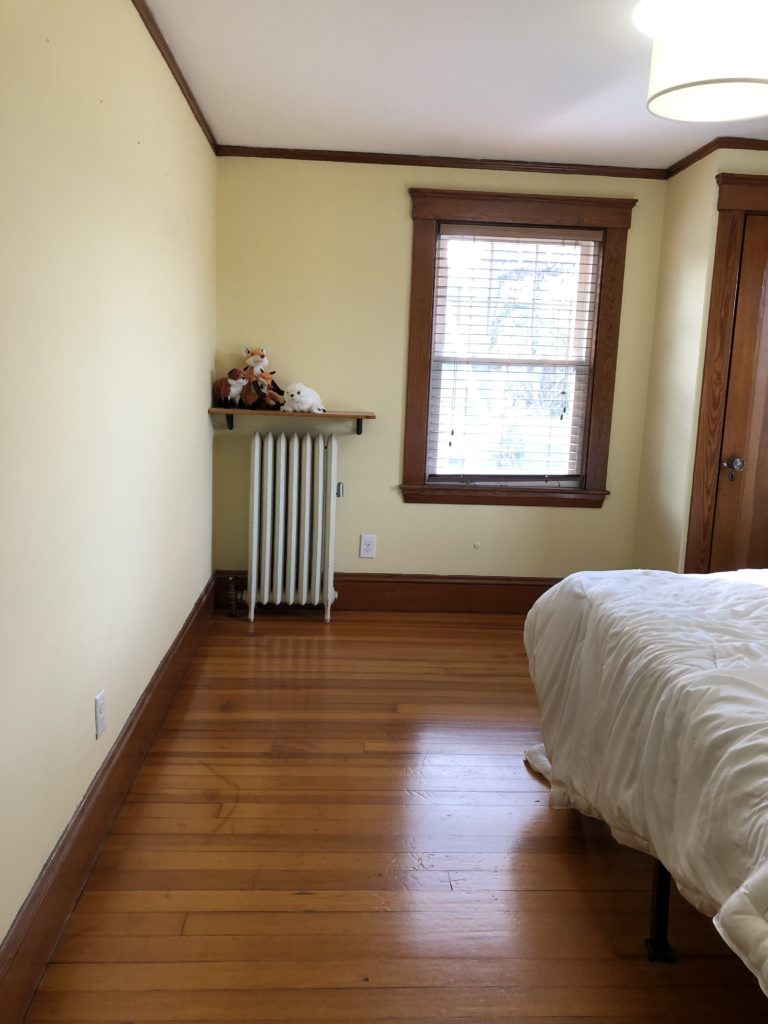 And after – SO STINKIN’ CUTE… Featherbed has an LRV of 85.51, which is surprising as I would’ve parked it more in the mid to high 70s. I think its due to the DEGREE of yellow in this paint colour as it does pop a bit more.

WHICH PAINT COLOURS ARE SIMILAR TO FEATHERBED, BUT A LITTLE TWEAKED?

Casa Blanca sits RIGHT on the money spot – not too yellow, not too muted and as the late great Goldilocks once said, ‘it’s juuuuuust right’. To be honest, the sectional in this next photo would’ve loved a colour with a slight red-pink undertone and less yellow-cream. However, this room belonged to the LARGE kitchen shown above with some pretty bossy countertops, so we had to do what was best for the hard surfaces first (but it still looks gorgeous). Casa Blanca has an LRV of 76, putting it nicely in the off-white range with enough depth to warm up a room and provide contrast with white trim.

WHAT PAINT COLOUR IS SIMILAR TO CASA BLANCA BUT A LITTLE TWEAKED?

Undoubtedly, you’ll be heading out in the near future to grab paint samples – stop right there! I want you to check out SAMPLIZE. Samplize offers peel and stick paint samples that are more AFFORDABLE, EASIER and more ENVIRONMENTALLY FRIENDLY than traditional paint pots. Here are just a FEW reasons why I recommend Samplize to my clients… DAMN, do some of my clients have styling skills!

Winter Wheat has an LRV of 76, so it’s in the off-white range just like MOST of the cream colours on this page. You’ll find that cream paint colours generally fall in the soft white to light-medium range (learn more about paint depths and LRV). If they get any darker (lower LRV), they turn into gold, beige, tan, etc…

WHICH PAINT COLOURS ARE SIMILAR TO WINTER WHEAT, BUT A LITTLE TWEAKED?

Long before gray was as on the scene and barfy builder beige began boring the living daylights out of us, Gentle Cream was holding strong in the cream world, warming up walls worldwide!

That’s because Gentle Cream is one of the PRETTIEST approaches to cream (if you ask me) with enough neutral to calm it and enough colour to add warmth and interest! However, if you LOVE yellow, you may find this colour a bit too passive (a TOUCH more beige-orange) and will want to bump over to one of the stronger options on this page. 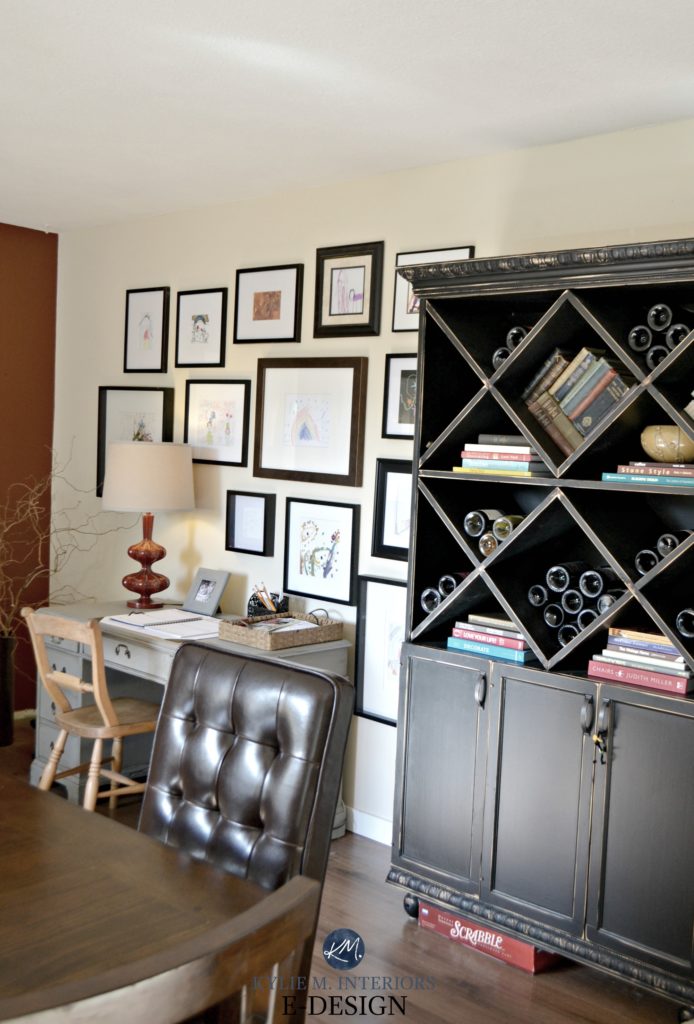 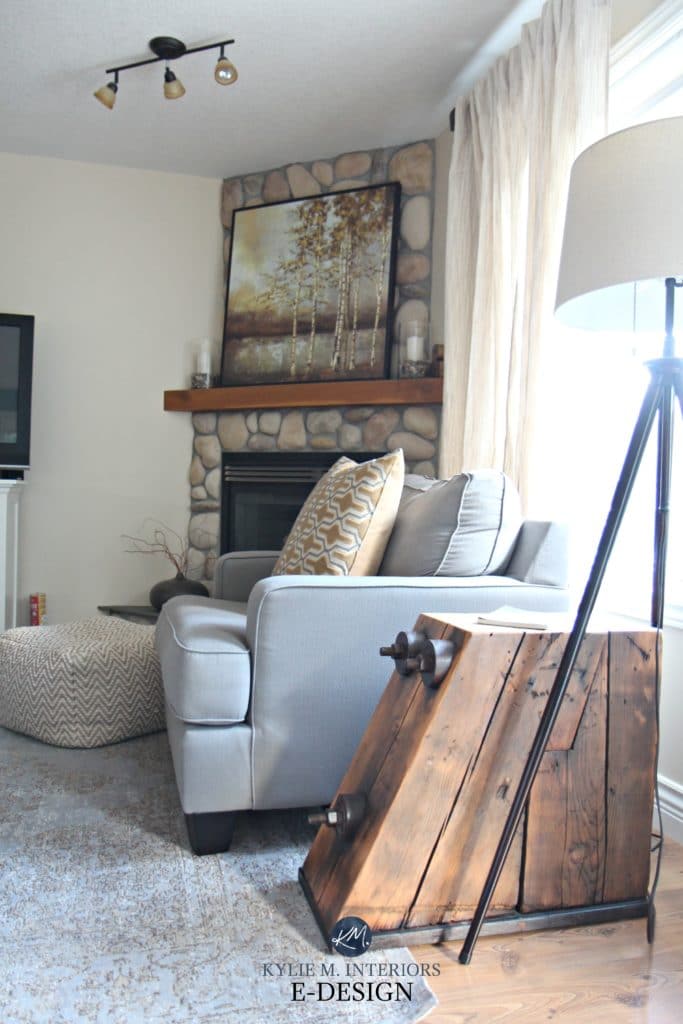 The LRV of Gentle Cream is a bit more skookum, coming in at 72, putting it more in the light range than the off-white range.

WHICH PAINT COLOURS ARE SIMILAR TO GENTLE CREAM, BUT A LITTLE TWEAKED?

There are a few cream paint colours that I don’t have images of but are still GREAT colours to consider. Because I ONLY use photos from my Online Colour Consulting clients, I don’t always a) have the photos I need or b) have photos that are clear enough to use – which is the case with Dover White.

Dover White is a tough one, but that doesn’t mean it isn’t pretty! It’s tough because MORE OFTEN than not, people use it on trim or cabinets, when in fact, it’s one of the whites I generally AVOID on these surfaces. Why? Because Dover White is too yellow. The yellow in Dover White can relate VERY WELL on walls if you’re wanting a soft muted almost white creamy look. However, as a trim or cabinet colour, it can be hard to coordinate with and very limiting in the long term.

A Benjamin Moore colour that’s somewhat similar to Dover White would be Benjamin Moore Acadia White, and BOTH make me NERVOUS for cabinets and trims for the same reasons!

Indian White is along similar lines to Gentle Cream, without as much WEIGHT with its softer, lighter cream approach. WHICH PAINT COLOURS ARE SIMILAR TO INDIAN WHITE, BUT A LITTLE TWEAKED? 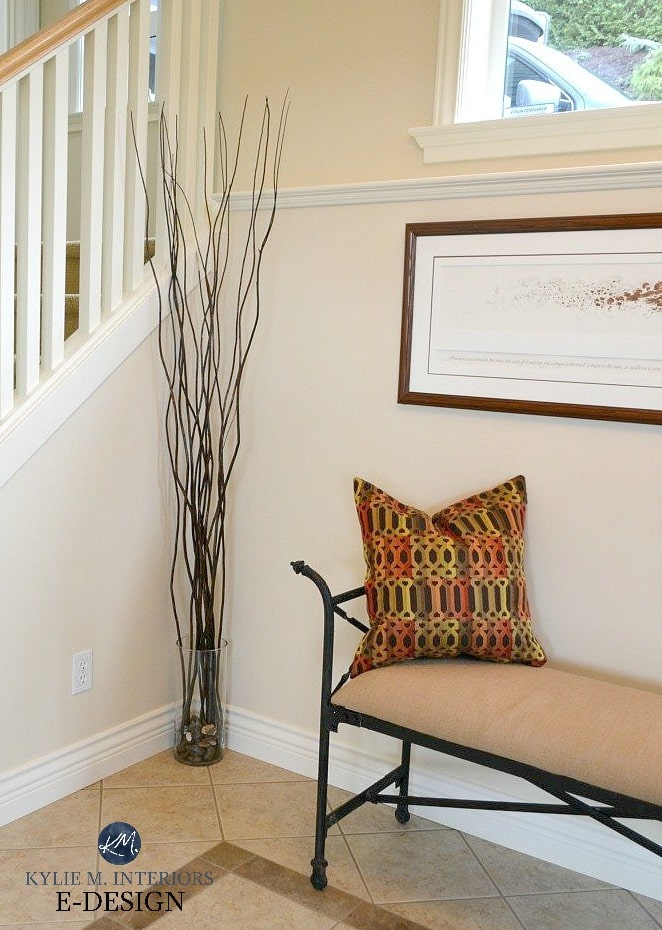 I just LOVE this colour and can’t wait for some E-Design photos to come in that I can use! Why do I love it? Well, Windham Cream is certainly one of the CREAMIER creams, with a stronger yellow base with a more muted neutral to calm it down. I just LOVE the gorgeous glow of Windham Cream (and I’m not even a bit fan of yellow!).

If you want a little adjustment on that, let’s look at Sherwin Williams Decor White which would be pretty, but more MUTED take on Windham Cream.

Antique White is definitely one of Sherwin Williams more POPULAR cream paint colours. Again, it’s ALLL in the blend – capturing that perfect balance of yellow with a neutral base to calm it down. 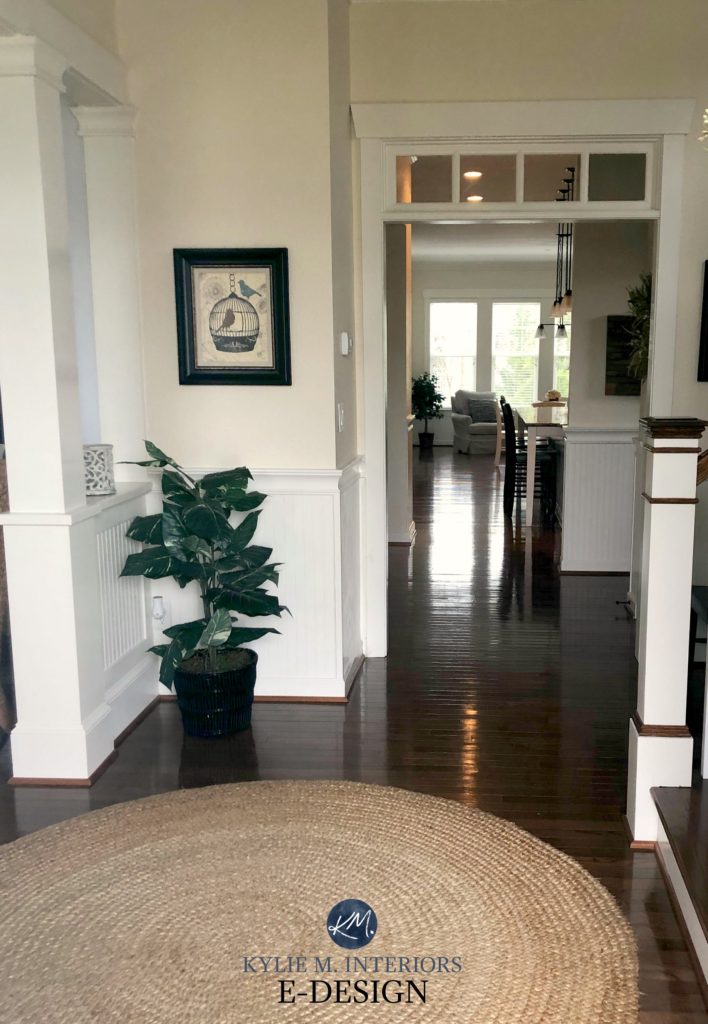 As far as cream paint colours go, Antique White leans a wink into orange, while still FOCUSING on yellow as its main jam. With its LRV of 72, it actually sits more in the light range, just winking at the off-whites.

However, Antique White is often MISTAKENLY used on kitchen cabinets with the wrong backsplashes and countertops. So, while it’s a GORGEOUS paint colour for walls, it’s one of the whites I hesitate to use on cabinets or trims. As shown below, Antique White has a reasonable degree of cream/warmth to it than can clash with opposite undertones. 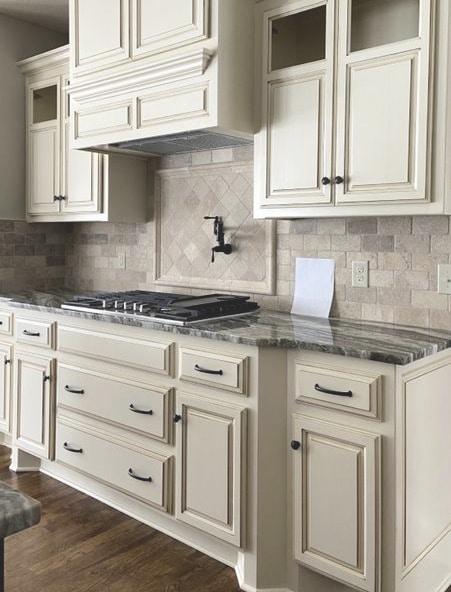 WHICH PAINT COLOURS ARE SIMILAR TO ANTIQUE WHITE, BUT A LITTLE TWEAKED?

The Best Paint Colours to Go With Cream Cabinets & Trim 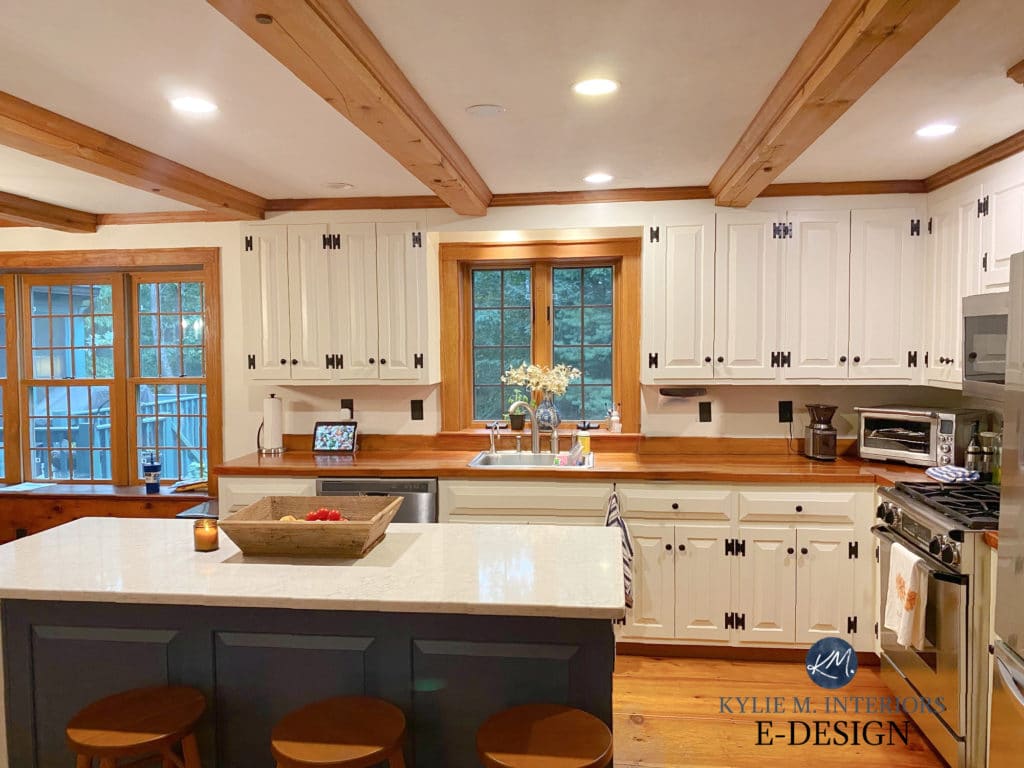 For you CREAM lovers out there, you might SCOFF at this colour, saying it’s hardly cream. And I agree, Ballet White is an INTENSELY muted, passive approach to cream – but it still has that soft base in there, it’s just SUPER subdued by gray-beige which tones it down drastically. If you truly DON’T LIKE YELLOW, but like cream, this might be what you’re looking for. 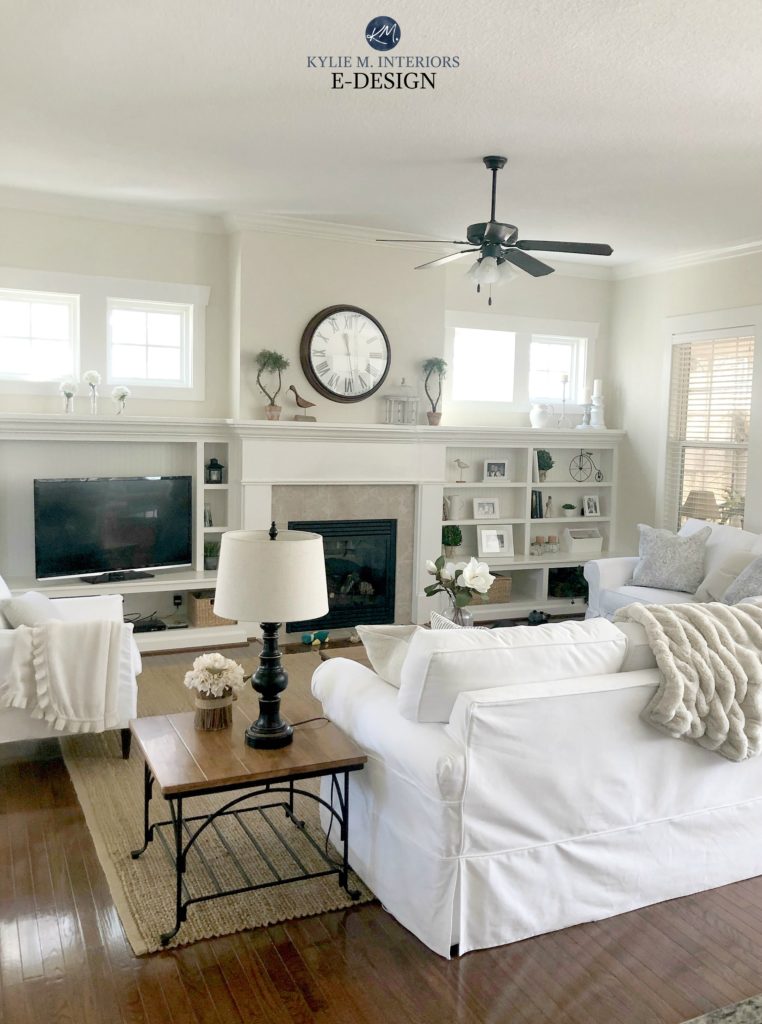 Which paint colours are similar to Ballet White, but a little tweaked?

Now, are you one of those who LOVED that first image?

If so, then you are a yellow lover and will want to take a closer look at Benjamin Moore Buttermilk, which steps outside of cream and into the wild world of YELLOW! 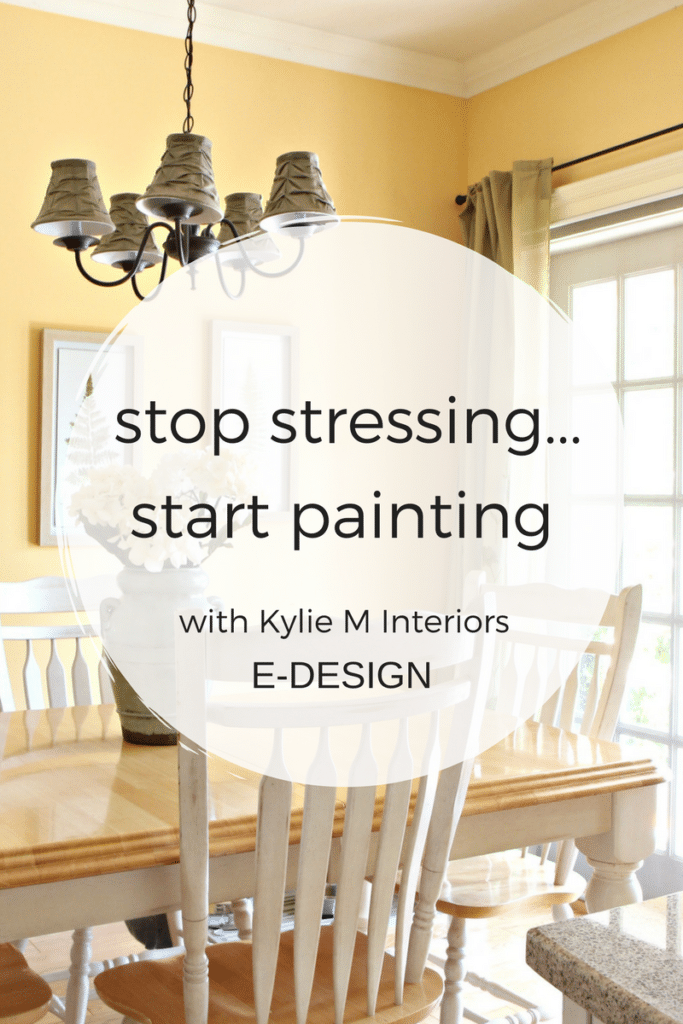 Sherwin Williams Greek Villa: is this the white you’ve been LOOKING for?  When looking for the best white paint colour for your walls, trims, cabinets or exterior, it’s easy toShare
Read More

HOW TO Choose The Best Green Paint Colour

Everything You Need to Know About GREEN When it comes to choosing the best green paint colour for your home, you’re often one small step away from a room thatShare
Read More

How to Update Your Fireplace – 5 Easy & Affordable Ideas

Tips to Make Your Fireplace Look More Modern Is your fireplace outdated and boring? Have you been wanting to do a remodel, but can’t afford a full makeover? If so,Share
Read More